Sandy Diamond became a die-hard baseball fanatic first; and then Cardinals fan.  You might say she was born into it. Well, she actually was. Her father, Jack Diamond (not of the restaurant fame for those from the St. Louis area years ago) was a die-hard, passionate Yankees and White Sox fan, having lived in New York and Chicago; and her mom, Jean Diamond, was a knowledgeable but maybe not quite as passionate White Sox fan. 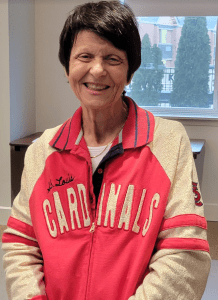 “I was born October fifth on the south side of Chicago during the Game Six of the 1947 World Series,” she said. “My birth occurred right at the moment when Al Gionfriddo of the Brooklyn Dodgers made a spectacular catch in center field to rob Joe DiMaggio and the Yankees of a World Series winning home run.”

Her dad, who grew up in Queens and was an avid Yankees fan, had two big things on his mind that day—his wife was giving birth and his beloved Yankees were in the World Series.

As the story goes, he was crushed when the Yankees lost that game, but earlier on that Sunday afternoon in Octobe, the doctor was looking for him– and he was out in his car trying to listen to the game.

“The doctor had to get my dad to stop listening to the game on his car radio and screamed for him to come into the hospital to attend my birth,” said Sandy. “This was the beginning of my love of baseball. I never stopped hearing about this game and ‘the Catch’.”

As soon as she could walk he started tossing her the ball. When she was three years old she was playing catch with her dad.

“He taught me the basics–how to throw, how to run, how to catch, and how to think baseball,” she remembers. “I went to my first game at age five and saw– who else–  the Yankees against the White Sox.  From then on, I went to between five and ten games a year.”

Sandy Diamond grew up knowing about Cubs rivalries, the first being with the Yankees.

“Because my father was originally from New York and a devoted Yankees fan, I was not allowed to root for the National League Cubbies or go to any of their games,” she said. “My dad said they were a minor-league team.”

She said that secretly, during her childhood, she did watch the Cubs on television and loved it when they played the St. Louis Cardinals.

“It was a thrill to get to see the great players I read about play such as Gibson, Musial, Boyer, Blasingame, Dark, Schoendienst, Javier, White & others.”

When she graduated from high school in 1965, she chose to go to Mizzou and it was there  she got more into the St. Louis Cardinals.

“In 1969, I graduated from Mizzou and accepted a teaching position in St. Louis.  Of course, being a fanatical baseball fan, in the spring, I occasionally called in “sick” so I could attend Cardinal-Cub games.

During this time, when Sandy first came to St. Louis and attended Cardinals games she still had a little love for the Cubs.

“In spite of my dad, I still liked the Cubbies,” she said. “I was so excited to go to these games; I wore my Cubs blue, put on my Cubs helmet, and waved my Cubby bear pennant. There were many games and a few entire seasons of getting ‘pelted’ by popcorn and beer, listening to words I can’t mention, and hearing about the great Cardinals teams. Finally In 1971 I broke down and changed from blue to red and I have been a loyal Cardinals fan ever since.

Sandy says she has attended more than 2,580 regular season games and every post-season & World Series from 1982 to 2018. 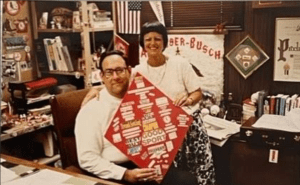 In the late ‘70’s she I left teaching to assume the role of Newspapers in Education (NIE) Coordinator for the St. Louis, Post-Dispatch. A big turning point in her life as a Cardinals fan came when she met the late Marty Hendiin, shown with her in photo, left.

“Bill Isam, then Public Affairs Manager for the Post-Dispatch, brought me to Marty’s office at Busch Stadium–known as ‘Trinket City’ because of all the trinkets and memorabilia he had all ovr the office– to meet Marty.  Marty was sitting behind his desk and I was immediately mesmerized by Marty’s love for baseball and all the trinkets.”

This was the start of where Sandy Diamond the Cardinals fan mixed her love for the Cardinals with her work and soon her job became a labor of love.

“Marty and I developed a wonderful friendship, partly punctuated by my being a sorority sister of his cousin, and that relationship continued until his untimely death in January 2008,” she said.

During the 30 years Marty and Sandy worked together (13 at the St. Louis Post-Dispatch and 17 in media and education-related positions), they collaborated on many projects involving the Cardinals:  field visits, brainstorming sessions, meetings, get togethers, talks, and walks through stadium.

“I loved Marty’s phone calls when he would say, ‘Kid what are you doing?  Can you come over to the stadium, I’ve got someone in my office that I think you need to meet, and it would be someone like Stan Musial or Jackie Robinson’s daughter.   He introduced me to lots of people.”

We worked on many projects and events. One of the first was a project with the Cardinals, St. Louis Symphony, Post-Dispatch and Channel 11 to produce a video and curriculum comparing baseball to the symphony; other collaborations included: Newspaper in Education Reading Week posters with Cardinal players; the “Sold on St. Louis” campaign. There were so many more.

Her parents moved to St. Petersburg, Florida, making it very convenient: her dad followed the Yankees during the spring, and Sandy went to see the Cardinals at Al Lang Stadium.

The baseball field was her happy place as they say, and so many of her memories are from baseball.

“As I think about all the memories,  what first comes to mind is Glenn Brummer’s steal of home, all of Mark McGuire’s home runs, Ozzie’s back flips, and his “Go Crazy Folks, Go Crazy” home run,” she said. “I also remember  Tommy Herr’s grand slam and all the seat cushions thrown on the field, seeing Pujols come to bat, and, of course, David Freese’s game winning homer to win Game Six of the 2011 World Series.”

Though those are all happy memories for her, the most excitement she has ever felt at Busch Stadium was in 1982. Her love of baseball started with her family and her father played another role in 1982.

Remember she was born Oct. 5 in the middle of a World Series Game and her dad had to be pulled away from the broadcast.

“The Cardinals were finally going to the playoffs and I had tickets to all the games,” she said. “I was like a little kid in a candy store and couldn’t wait for the October 6th game to begin.”

On her birthday that year- the day before the game was to take place,  her father, now living in St. Petersburg, Florida, just had a quadruple bypass heart surgery and was in intensive care. Early that week her mother called and told her she should get to Florida-they didn’t think he was going to make it.

“I left on the very next plane,” she said. “When I got there, my dad, who was still in intensive care, but was now alert, promptly told me to go back to St. Louis—he said he did not want me to miss the playoffs and assured me that he would be okay. I resisted but he sent me back anyway.”

She knew she had to do it for her father, The game she would have missed against the Braves was rained out as luck would have it and she was able to see all the post-season and World Series games that year, including a World Championship for the Cardinals. 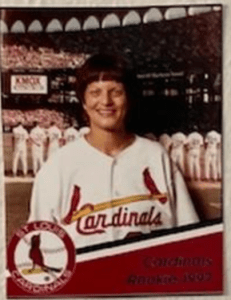 “My dad was so excited for me,” she said. “He was so glad he sent me back to St. Louis.  My dad lived for five more months. My mom lived to be 96 and never missed a Tampa Bay Rays game.”

Sandy is filled with so many happy Cardinals memories, but it is the one she was told by her dad about the Oct. 5 when she took her first breath in this world—and the one she spent with him that Oct. 5–five months before he took his last–that will always be in her heart.