As a young girl growing up in St. Louis who didn’t have the money to play sports, Ruth Harker could have never imagined that she’d end up being a world-class soccer player with a lasting impact on young athletes everywhere– and be inducted into a soccer hall of fame. This week it was announced that Harker will be part of the 2019 inductee class for the St. Louis Soccer Hall of Fame.

She has built up an impressive soccer career, landing in the UMSL Hall of Fame, as MVP of the 1985 Olympic Festival, on the first-ever U.S. Women’s National Team– and now the St. Louis Soccer HOF to top it off. 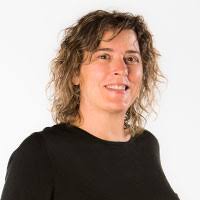 “It is an honor and a pinnacle part of my career,” said the former Olympic goalkeeper, shown in photo. “I didn’t expect it, but I see this as a greater platform to do things for other people.”

These athletic accomplishments did not come without struggle for Harker. The St. Louis-raised athlete wasn’t able to play sports until she was a teenager due to financial limitations. Harker, the youngest of four, eventually willed herself into sports at the age of 13 by managing all the sports teams at her junior high and getting a job just so she could pay to take cabs to practice. Not to mention, she is blind in one eye. However, Harker was never one to make excuses and pressed on toward her athletic goals anyway.

At fourteen years old, Harker got her first uniform and stepped in goal for the first time. Harker’s athleticism and drive were quickly noticed by high-level coaches; the next summer, she was already training overseas in Sweden. Harker describes the whirlwind of a soccer career as “serendipitous.” 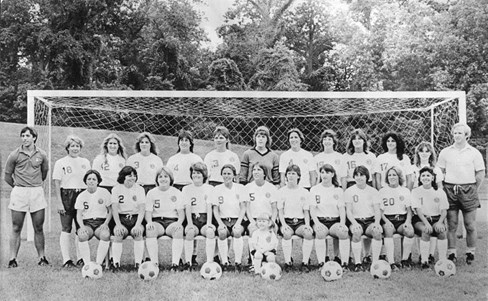 Three main highlights stand out to Harker as especially surreal moments in her career.

The first was when her collegiate team at University of Missouri-St. Louis beat the previous-year national champion University of North Carolina team for the first time in program history.

Shortly after, a highlight moment was when she was chosen to be a part of the first U.S. Women’s National Team (USWNT) in 1985, along with the famous soccer star, World Cup  and Olympic champion Michele Akers.

The players were selected by invitation from among the best soccer players in the country, to go to Baton Rouge to take part in  the “Olympic Sports Festival” and it was from this group that the National team was chosen.

Harker won  Most Valuable Player at the Olympic festival, and when her coach Mike Ryan (a soccer instructor from Seattle), leaned down and told her congratulations—and she was floored.

“All I was thinking is ‘What? This is so surreal,’” said Harker. “I thought for sure that there was no way I would be one of the two keepers chosen.”

The U.S. Women’s National Team would soon go off to Italy to play their first international matches in program history. This tops off the list of career highlights for Harker.

“I was playing in Italy, hearing our national anthem, and just covered in goosebumps,” she said. “I was in front of the biggest audience I had ever played for in my life, with USA on my back, and feeling so much pride. The only thing on my mind at that moment was ‘Wow, I can’t believe I’m here.’”

Harker’s role as a pioneer for women’s soccer in America is not something she overlooks.

“I feel like we played the part (of starting the climb to where the USWNT has come today) for sure,” she said. “Someone had to do it, and we took it head on; that young group of women from all over the country turned the lights on. It was a journey, and still is a journey, for the U.S. Women soccer players. Our journey wasn’t easy, but we just pulled up our socks and got out there.”

Harker’s impact goes much farther than just on the pitch, as she has used her career as a platform to serve others. The athlete uses her connections to give back to children who are sick, disenfranchised, or struggling with personal issues.

One example is when a young boy, also a goalkeeper like Harker, was diagnosed with a brain tumor. Harker used her soccer connections to support him by sending a gift from a fellow soccer player for each round of chemotherapy. The gifts include gloves from U.S. National Team goalkeepers Tim Howard and Hope Solo, or t-shirts from Brazilian soccer legend referred to as Pelé.

Another way Harker gives back is by positively influencing young female athletes.

“There are a lot of young girls who struggle with image and self-doubt, and I try to show them beauty through sport and that their body is an incredible machine that can take them away from all that negative stuff.”

The current mother and businesswoman says that she didn’t truly understand the power of giving back until she got older. After her soccer career ended, a mentor helped get her on the board of Easter Seals—a charity created to serve individuals with disabilities. From that point on, Harker realized her passion for charity and community as well as the resources that she had gained from her career that could benefit others.

Harker’s professional soccer career may be a thing of the past, but the impact she has on people around her is continually growing.

“I continue to give back to others because of what of sports have given me.”

Along with Ruth Harker, the St. Louis Soccer Hall of Fame announced the following Inductee Class for 2019:

Information on the 2019 St. Louis Soccer Hall of Fame Dinner