JUPITER, Fla. – Dabo Swinney did not recognize the phone number, so the Clemson football coach let the call go to voice mail.

When he checked the message a few minutes later, he was left with a question.

“Why is the manager of the St. Louis Cardinals calling me?” Swinney said on Sunday. “I called him back, and he just wanted to know if we could find a day when I could come down and speak to the team. This was really the only day.

“He had some specific things he wanted to talk about and we talked about team and culture, all of those things cross over, no matter what sport or organization to be honest with you. … What a privilege.”

The Cardinals’ players knew they were going to hear from a “well credentialed celebrity” according to Matt Carpenter but didn’t know Swinney was the guest until the two-time national champion coach walked into the clubhouse.

He had a video presentation and a 50-minute speech, then went out in street clothes, borrowed a bat from Carpenter and took a turn in the batting cage. Swinney joked that he had “warning track power” and he was correct, hitting two balls to the warning track in left.

He saw one sign that said 301 in left field and joked that he could hit the ball that far but then was told that was a section number not the distance down the left field line. 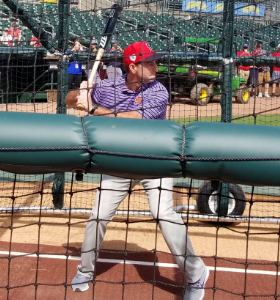 “Kyler Murray’s not the only guy with conflicts,” added Swinney, whose team went through its third spring practice Saturday before he flew to Florida. “I got baseball and football going on. I told my team yesterday, ‘Kyler doesn’t have anything on me.’ I got called to the big leagues. This has been great. Fun day; hope I had a good message for them.

“I prepared specifically for it. I was really looking forward to it and was excited that Mike reached out to me and wanted me to do it. He told me I had 50 minutes so I figured I’d better come strong. I had some things I thought would resonate with this group. It will be fun to kind of follow them from here.”

Shildt said he did not know Swinney, but that they had a couple of mutual acquaintances which put the two in touch about 10 days ago. Swinney’s talk followed visits earlier this spring from PGA golf champion Zach Johnson and former Cardinal Rafael Furcal.

“Look at how they compete, how they perform, how prepared they are. That’s what we’re doing here. I did not tee him up to say ‘This is what I want you to talk about.’ The beautiful part of the message was it synched up.

“Habits of successful teams and organizations are common threads, applicable to any and all.”

Swinney played baseball growing up and still coaches his kid’s teams now. Despite the differences between the two sports, Swinney said he also sees a lot of similarities between college football and major-league baseball.

“I’ve always been a baseball guy,” he said. “I love baseball. Pretty unique to have this opportunity.

“The biggest thing is creating a daily focus and daily habits in order to really enjoy the journey along the way. You don’t get to take five steps at a time, it’s one step at a time, one at-bat at a time, one pitch at a time and then you go on to the next thing. Whether you’ve had success or had failure, you have to refocus on what’s next.

“It’s having some core values and fundamentals that you believe in day in and day out and you look up after being great today and then those today’s have become weeks and those weeks have become months, and look where we are. But you can get distracted if you let the big picture overwhelm you. You’ve got to have some discipline and some fundamentals that you believe in that allow you to do that.”

Shildt pulled a notebook size piece of paper out of his pants pocket to show some of the notes he took while Swinney spoke.

“I didn’t have enough room for some of the other stuff,” Shildt said. “There were some takeaways.”

Swinney said growing up he was a shortstop in baseball, a point guard in basketball and a wide receiver in football. He had some college offers in all three sports, he said, but wanted to go to Alabama, where he decided to walk on to the football team.

“My passion was basketball, I loved football and my best sport was probably baseball,” he said. “I wasn’t as passionate about it. I remember evaluating it and that’s when I found out baseball did not give full scholarships. That was out; really wanted to play basketball but I was applying old school analytics in those days; five guys on the court, 15 on the team, the odds are really against me. Then I looked at football and in those days it was 90 or 95 scholarships and there was special teams. Thought I had a better chance, and it all worked out. That was God’s plan for me.”

Swinney said some of those details were included in his talk to the team.

“I went up to him afterwards and told him his message was fantastic,” Carpenter said. “Greatness and excellence in any endeavor, there’s a reason why things happen. There’s a reason why he’s been so successful at Clemson and we got a glimpse of it today – the values that he teaches to his kids down there. He’s got a special thing going and it was a thrill to listen to him talk.

“His message truthfully was about culture and the culture of winning regardless of sport. … Mike Shildt’s big message this spring has been ‘normalized excellence’ and we’ve had some great examples of that, Dabo, Zach Johnson, Rafael Furcal. Hopefully there will be more guys. Today was special.”