JUPITER, Fla. – Being young has never been a problem for Dylan Carlson, whether it was when he was 10, 14 or now at the age of 20, where he has spent this spring as the youngest player in the Cardinals’ clubhouse.

“I don’t mind being the youngest guy,” Carlson said. “It’s really great to be in here at any age.”

Ever since he joined the organization in 2016 as the 33rd overall selection in the draft, Carlson has been one of the youngest players in each  of the leagues he has played in and has more then held his own against the older competition.

That has not come as a surprise to his father, Jeff Carlson, who also was his baseball coach in high school in Elk Grove, Calif., and knows his son’s skills, and his baseball knowledge and maturity, has always been higher than any other players his own age.

“He has grown up in the dugout and was around my program for years,” Jeff Carlson said. “He’s a baseball rat and soaks everything up. When he was 10 years old, we were playing in Redondo Beach and he was watching from the stands and was telling some of the dads what we were going to do before we did it. He used to sit on the bench when he was the bat boy and he would watch everything; he took everything in.”

Carlson began playing for his dad’s Elk Grove High School team when he was 14, primarily because even at that young age, the father knew his son was old enough to handle failure, a skill baseball players develop at different ages – if at all.

“If a guy can handle the failure and keep progressing like you should and not go the other way, you can have a real good career,” Jeff Carlson said. “If you push too quickly and maybe the player is too immature for that level and can’t handle the failure, it’s going to eat you up.

“Dylan was always around the game and around mature players when he was really young. That’s really helped him. That’s what their scout, Zach Mortimer, and the Cardinals recognized in him; they recognized that he needs to be challenged. That’s when you get the most out of him – keep pushing him.”

The Cardinals have done that this spring, bringing him to camp as a non-roster player despite his age and the fact he spent last season mostly at Class A Palm Beach, the only player in camp other than some of the extra non-roster catchers who has not spend at least one day at Double A or higher.

The switch-hitter has not been out of place, whether it has been on the field, sitting at the table in the middle of the clubhouse eating lunch with former All-Stars, working out in the weight room or hitting in the cages.

“I’ve been really impressed with Dylan,” said manager Mike Shildt. “He looks like he’s taking advantage of the experience. He seems to be a mature young man who has gone about things exactly the way you want; head on a swivel, paying attention, listening.”

One of the veterans who Carlson has bonded with this spring is Paul Goldschmidt. The two recently had lunch together, with Goldschmidt asking Carlson as many questions as Carlson was asking the All-Star first baseman.

“It’s been unreal just being around these guys and being able to learn from their experiences,” Carlson said. “I’m trying to take advantage of being around this group of people. It’s been a real honor. A lot of stuff has blown me away; there’s a lot of great things going on here and I’m just grateful to be here.

“I’ve learned so much not only the game, but how to handle myself off the field; the type of things that are expected. Just watching the way some of these guys work is eye opening. It’s good to see they take a lot of pride in it and it’s something I’m going to do better myself to try to make myself the best player I can be.”

One of those players Carlson has leaned on for advice is Goldschmidt.

“I’m just trying to learn anything I can,” Carlson said. “I don’t say too much but I am trying to see what it is that makes them so elite. I’m the youngest guy, so it’s even bigger for me to learn as much as I can while I’m here.”

Goldschmidt has been happy to answer Carlson’s questions because he remembers what it was like to be a young player in a clubhouse filled with veterans when he was coming up with the Diamondbacks. He was older, having been drafted out of college, but the feeling was still the same.

“I had a ton of guys,” Goldschmidt said of the veterans he leaned on for advice. “I was really spoiled to have a great veteran group. My locker was between Willie Bloomquist and J.J. Putz and they helped me a ton. I asked a ton of questions and just watched everything they did.

“I was just a sponge soaking up all their knowledge. I was eternally grateful for what they shared with me.

“I’ve enjoyed watching Dylan in the outfield. He’s made some really good plays and it seems he’s got the fundamentals down; little things like hitting the cutoff man, that a lot of guys in the minor leagues are not as consistent at doing. He’s definitely got a really good swing and a feel for the game.”

That’s the kind of comment a father, and a former coach, wants to hear, said Jeff Carlson.

“What an experience for a 20-year-old,” he said. “This early in his career, to be able to talk with those guys and get the tips is going to make him more comfortable with the situation.” 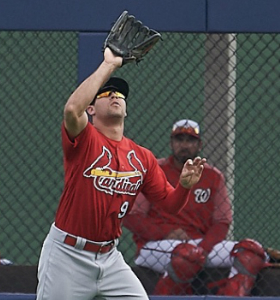 Carlson said he didn’t really know what to expect from his first major-league spring training, about how much playing time or at-bats he would get.

“I came here ready to learn,” he said. “I have learned a lot. To get some time on the field has been a great opportunity and I’m trying to make the most of it and get as many at-bats as I can get.”

Carlson played in six of the Cardinals’ first seven games this spring, and Monday he made his first start and played a complete game against the Tigers in Lakeland. His 21 plate appearances are among the most of any player in camp.

“Being in this clubhouse everyday is kind of an awe moment,” Carlson said. “To sit at the table and pick guy’s brains is just something I’m trying to take advantage of while I’m here.”

Carlson grew up in a baseball environment. His father coached three first-round draft picks in high school, including his son; Derek Hill by the Tigers and Nick Madrigal, out of college, by the White Sox. J.D. Davis. now with the Mets, also played at school before that group arrived as did Rowdy Tellez, now with the Blue Jays.

“He’s got a nice circle of guys who all work out together and hit together,” Jeff Carlson said. “J.D. Davis has been a big mentor to him. … He’s a great kid, and he works really hard. He knows what he wants. He’s living the dream.”

There are at least three concessions to his age that Carlson has had to deal with this spring. He has the very corner locker in the clubhouse, sharing it with Brian O’Keefe; he was assigned uniform number 91, and he still is too young to rent a car so he has to bum rides with his older teammates from the hotel to the ballpark.

The day is coming, likely later this week, when Carlson will be reassigned to the minor-league clubhouse as he prepares to open the regular season – where he most likely will again be one of the youngest players in the league as he reaches the Double A level with Springfield.

He spent most of 2018 in Palm Beach, a notoriously tough challenge for hitters, and finished with nine homers and 53 RBIs while hitting .247 in 99 games, statistics that don’t accurately measure his performance, which should be reflected better this season in the more hitter-friendly Texas League.

“Age doesn’t matter,” Goldschimdit said. “It’s about your baseball knowledge and maturity as a person. You don’t have to be a certain age if you are a guy who grew up around the game and have good baseball knowledge.”

When he sees someone like Carlson, with his desire to learn everything he can about the game, Goldschmidt is more than willing to share what he knows.

“That’s what I was taught,” he said. “I didn’t make up anything in this game. Anything I’ve learned I’ve taken from someone else and now I try to share that. I’m still doing it myself; there are a lot of new people I can learn from.”