Anyone who goes to baseball games for a living is living the dream and no one knows that more than Mark Harrell, the Springfield Cardinals long-time photographer.

Harrell recently published a book chronicling the 14 year history of the Springfield Cardinals. He has been the team photographer for all those years. 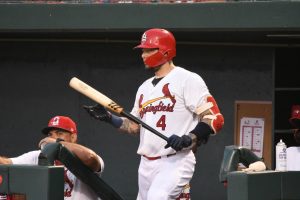 Every night at the ballpark is different and still fun for the Springfield native. This weekend was especially exciting for the fans as St. Louis Cardinals catcher Yadier Molina was there.

The stands were packed and the fans wanted to see the Cardinal’s catcher. Molina had not played there in the minors, and had only been there before on previous rehab assignments so this was their big chance and Mark Harrell was there to capture it with his Nikon D500. 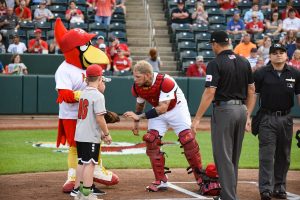 While getting that great action shot is always the goal of a professional sports photographer, sometimes the best shots aren’t from the actual game; they are from things that a good photographer anticipates, like the shots he took with young ballplayers on the field before the game.

“It was great having Yadi here,” said Harrell. “I know everyone wants a picture of him if he does anything so I hung around him. I didn’t bother him by talking to him. He knows I’m the Springfield photographer. The thing is I want to catch ‘that shot.'” 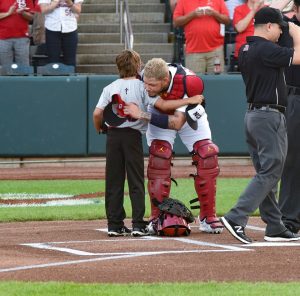 He was there when a child spontaneously hugged Molina, in the photo he took shown left. Later, Molina got hit in the head with a baseball (luckily he was OK) but Harrell got several closeups of that. He was also there when Cardinals top prospect Dylan Carlson hit two home runs on Sunday night.

Harrell knew he was destined to be around baseball as he was growing up in Springfield. 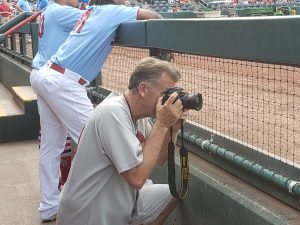 “Baseball is my love; it’s my friend,” he says on page 11 of his book, “From Darkroom to Dugout; My Adventures Photographing Springfield Cardinals Baseball.”

He has always loved playing the game and like many young boys, aspired to be an MLB player when he grew up.

“My dad loved the game,” said Harrell. “He was a really good fast pitch softball pitcher in Springfield which was big at the time.  He was a fan of Stan Musial and he and my mom supported my love of baseball by buying me baseball cards and that old game ‘All-Star Baseball’ which we played all the time when I was a kid.” 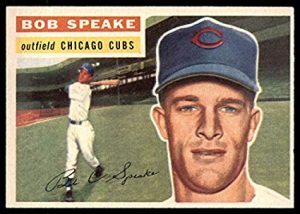 He had another baseball connection, which he goes into more detail in his book. His uncle, Bob Speake was a major league player, playing for the Chicago Cubs and San Francisco Giants.

“From Day One, my Uncle Bob had team autographed baseballs all over his house,” he said. “There were autographs from guys like Willie Mays and Ernie Banks and Uncle Bob played told me stories about playing against Jackie Robinson and the Brooklyn Dodgers. I still get to hear the stories from my uncle who lives in Topeka, KS. He just turned 89 this month and is sharp as a tack. He still golfs and can shoot better than his age!”

Harrell has the typical rivalry with his son Ryan who went the way of his uncle and is a Cubs fan.

“My  daughter Megan, who lives in Nashville is a diehard Cardinals fan and bleeds Cardinal red,” said Harrell. “In fact we were at that game Mark McGwire hit his 61st homer and we were actually in a picture that made it into Sports Illustrated.”

It’s taken a while for his wife Wendy, but she is a Cardinals fan and as he mentions in his book he likes it when he comes home and sees her with the TV on watching the Cardinals. 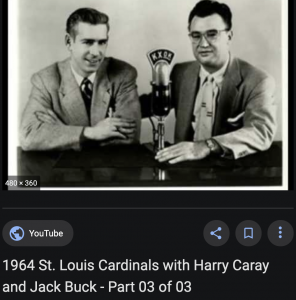 Mark Harrell is a fan of baseball nostalgia– especially the old radio broadcasts.

“I listen to old baseball broadcasts on YouTube when I go to sleep,” he said. “People might not realize it but they have entire games on YouTube and I often just pick a game from the 1960’s– it may be Jack Buck and Harry Caray and start listening and then drift off to sleep. It’s like when we were kids and listened to the broadcasts on the radio at night.”

Harrell played three years at Kickapoo High School as both an outfielder and a pitcher.

“I didn’t make it to the majors but three of the guys I played against did,” he said.

He was pretty good though, having been named All-Conference and MVP his Senior year. Harrell’s love of baseball started on the field and transferred to his favorite team the St. Louis Cardinals. He was excited when in 1998 a team called “The Ducks” from the Central Baseball League came to nearby Ozark.

“When the Ducks came to Ozark I volunteered the first year and then continued with it,” he said.

Harrell has carved various niches for himself by being very enterprising.  Though the job looks easy he has worked very hard to get to where he is, and he continues to work long hours, but it’s a labor of love. He noticed the Ducks could use another play-by-play man so he took a tape recorder to Tulsa and taped himself doing a Tulsa Drillers game so he would have an audio tape.

“I made a demo tape on cassette tape, like we used back then; and ended up getting the job  doing play-by-play for them,” Harrell said.

The Ducks stayed around until 2003, when the Cardinals announced  the Springfield Cardinals were coming to town and it would seem like it was a dream come true. But Harrell remembers not liking it.

“I was upset that the Ducks ended” he said. “But several days before the first game for the Cardinals I changed my tune and applied to be a photographer.” 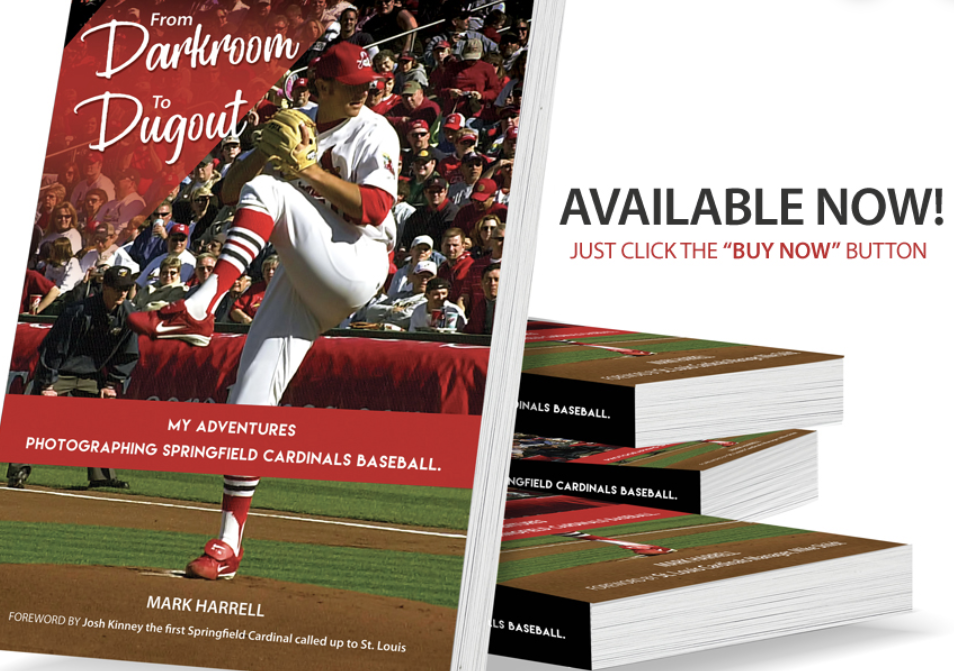 And the rest is history; fourteen years of history– which is included in his book. From Darkroom to Dugout, My Adventures Photographing Springfield Cardinals Baseball. The book a beautiful keepsake book.

It would be a great gift for a Springfield Cardinals fan or a St. Louis fan, as so many of the famous players of today passed through Springfield. While they were there Harrell took their pictures.

It’s easy to see his love for the game as he chose to do the book in full color on glossy, photographic pages.

As pointed out in the book, former Cardinals player Josh Kinney wrote the Foreword. Kinney was the first Springfield Cardinal to be promoted to the St. Louis team.

Because he loves baseball so much, like many fans, he remembers benchmark dates by what happened in baseball.

“My dad suddenly passed away in 2006,” said Harrell in his book. “Five years later mom passed away in 2011. The St. Louis Cardinals, the team I live and die for, won the World Series both those years.  I’d like to think it was God’s way of easing my pain, just a little bit.” 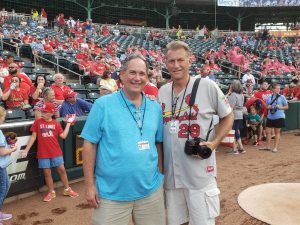 Rob Rains  graduated with Harrell from Kickapoo High School in Springfield and now they get to work together when Rains is in Springfield doing a feature. Harrell often supplies the photos for his stories on STLSportsPage.com.

“We ate lunch together every day,” said Rains. “He played baseball and basketball and sat with a group of athletes and journalism people. At least three of us went on to have careers in journalism.”

They both worked on the high school newspaper, The Prairie News: Rains loved telling stories with words and Harrell crafted his career with pictures.

“Mark crossed the lines of being both an athlete and photographer,” said Rains. “He also did photos for the yearbook, and photography has always been a career for him.  His job at the Springfield Cardinals lets him live out his love for baseball.”

As a note of trivia, Harrell knocked in the first two runs for the very first Kickapoo baseball team.

“When we started STLSportsPage.com I started covering the Springfield Cardinals on a more regular basis,” Rains said. “When I’m there, I still try to have dinner with in the press box .”

“Mark had a front row seat to see so many guys trying to make their way to impact the team in St. Louis,” said former Springfield Cardinals and St. Louis Cardinals pitcher Kyle McClellan regarding his credibility to produce such a book.

Harrell says that being able to photograph the upcoming stars before they are famous is one of the best things about his job. 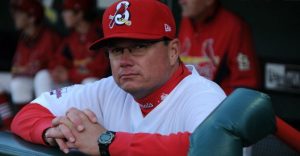 “That’s what I love about this job,” he said. “These guys are raw, nobody knows much about them except for the insiders. That was how it was with Mike Shildt (shown, right during his days with Springfield in a shot taken by Harrell). I really enjoyed covering him and now he’s the manager of the St. Louis Cardinals.”

Besides all the photography work he does with the players, he was also instrumental in starting the “Field of Dreams” program. This is when young youth league players get to run onto the field with the Springfield Cardinals. 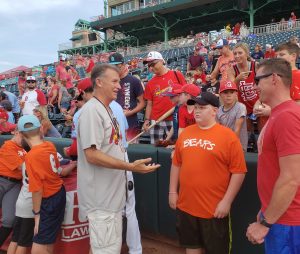 Besides all the work he does with the players, he is also instrumental in placing kids in the right place for the “Field of Dreams” pregame ceremony before each game. This is when young youth league players get to run onto the field with the Springfield Cardinals for the National Anthem.

If there are big groups he will take pictures of them. Sunday was Christian Family Day and there was a big group so chances are he photographed them. 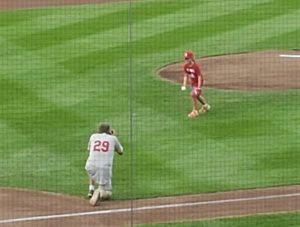 He also does the “first pitch.” He goes out on the field to photograph those throwing out the ceremonial pitch.

In his 14 years of working with the team and going all over Hammons field there is one place he will never go.

When asked why he adheres to the superstition when he’s a photographer he replied, “I’m a baseball player that does photography.”

The pictures in this delightful book make it hard to put down. One starts out thumbing through the book and stopping on various photos, reading  the captions to see who is in it. Then they pique your interest and you have to start at the beginning and read the whole book.

Harrell’s stories are interesting and worth reading, but it always comes back to the  photography, of which he is a master.  He captures so many memories in one book.

Photo Credits: All photos with Yadier Molina and Mike Shildt by Mark Harrell; all shots of Harrell by Sally Tippett Rains 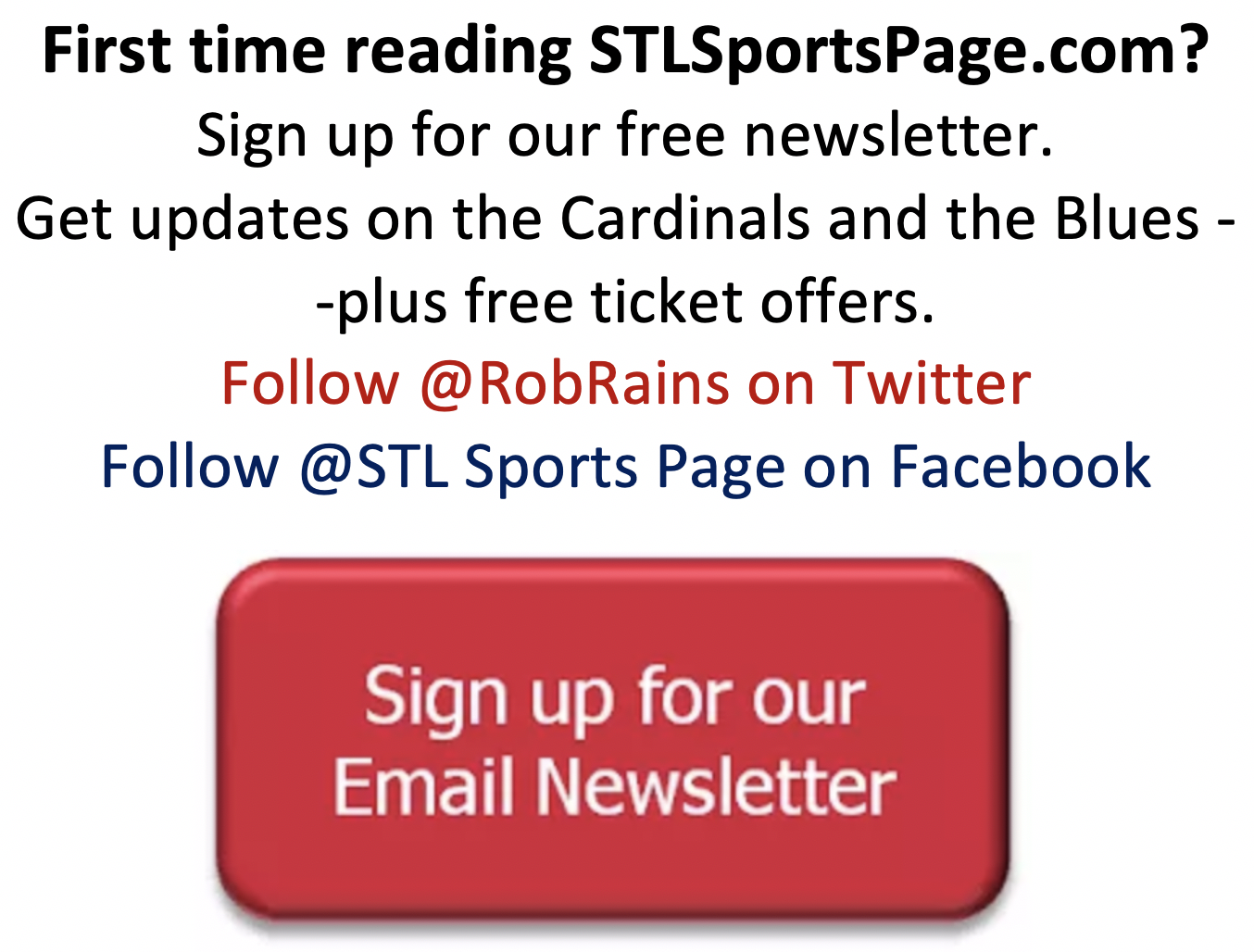 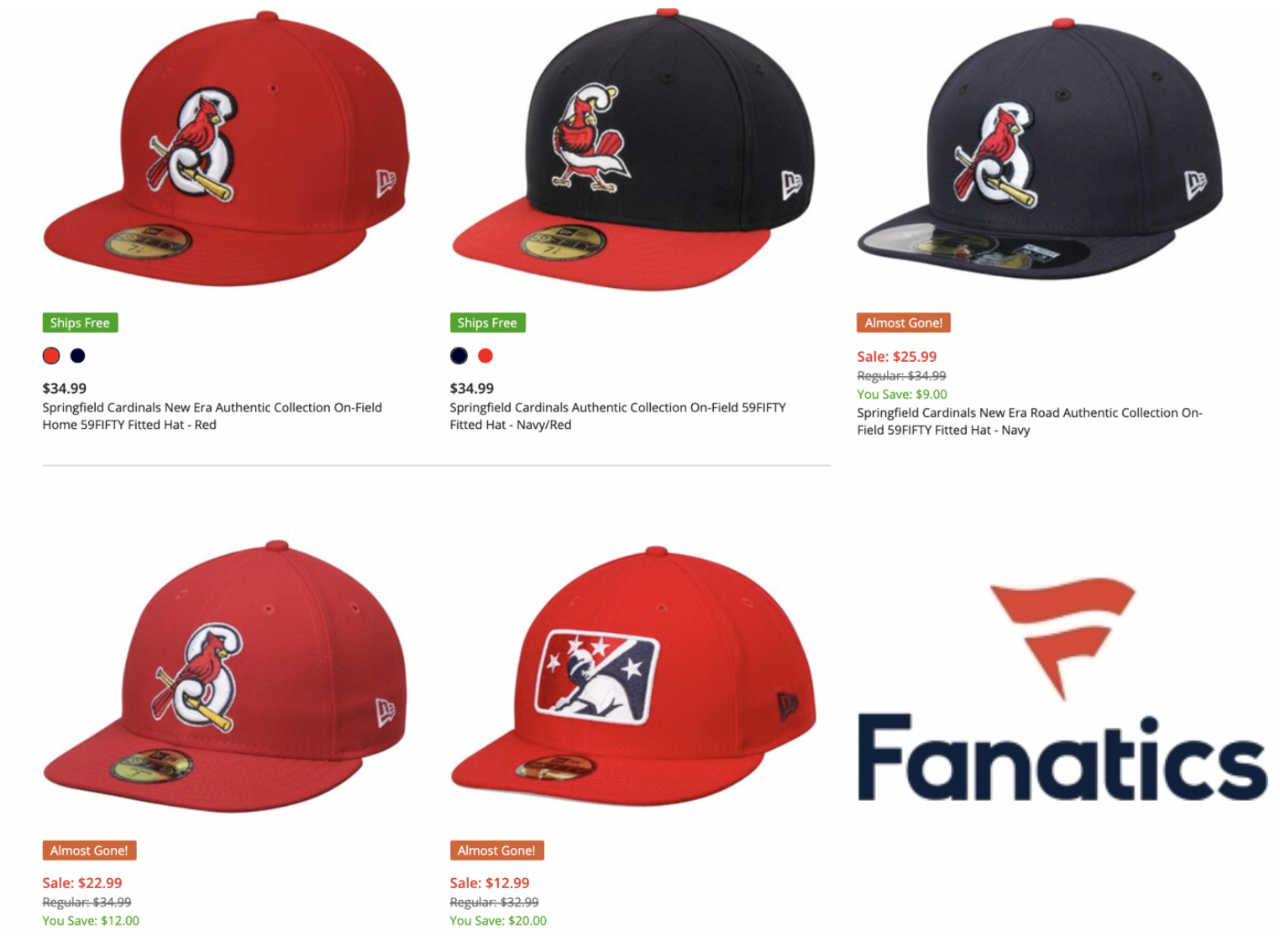 Why is a player on the Mets a mentor and role model for Cardinals’ prospect Dylan Carlson?

Dylan Carlson is one of the Cardinals’ top prospects and part of his success can be traced to a mentor and role model, J.D. Davis of the Mets. […]

Check Out Dylan Carlson, Springfield Cardinals: Schedule, Tickets, and a Few Things to Do

For fans who really want to get an early look at players who could be headed to the major leagues, the team they should pay close attention to is the Double A Springfield Cardinals– and […]