The St. Louis Blues start their 53rd season—this one as Stanley Cup Champions—when they take the ice Wednesday Oct. 2 and host the Washington Capitals at 7 p.m. at Enterprise Center.

The Missouri History Museum has a Blues Exhibit that will excite fans—and it’s free. The exhibit is a must-see for Blues fans because it features the authentic jerseys, sticks, and other gear that was actually used by the players in the 2018-19 season as they had their road to the Stanley Cup.

The Blues held their Championship Ring Ceremony at the exhibit Monday night so the players were the first to see it. 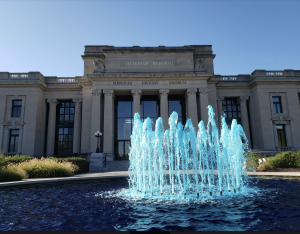 The cases feature artifacts from the Blues historic championship run and will be on display at the Museum starting today (October 1, 2019) through January 26, 2020.

Dr. Frances Levine, the president of the Missouri Historical Museum was on hand and complimented Randy Girsch, VP of Community Development at the St. Louis Blues who was there also.

“The Blues did such a great job working with us,” she said, saying Girsch had helped with assembling the exhibit. 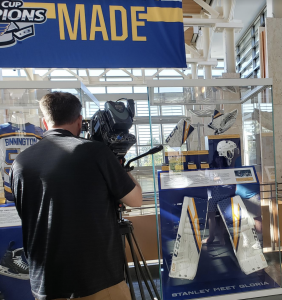 The History Museum worked with the Blues for the exhibit called History Made which features more than 25 artifacts on loan from the team.  History Made tells the story of the underdog team that took home the NHL’s highest honor and united its community in the process.

“In a town that had not been known for good news recently, it was a good news moment shared locally but also globally,” said Dr. Levine.

Why  the Blues Stanley Cup exhibit at the History Museum?

June 12, 2019 is a date that will forever live in St. Louis sports history. The team that had gone 52 years without ever winning a Stanley Cup game, let alone a Championship—hoisted the Stanley Cup for the first time.

“I am excited about this exhibit because I had never lived in an area that was host to a professional sports team, but when I moved to St. Louis (five years ago) I found a niche with the Blues,” said Dr. Levine, who has a doctorate in anthropology from Southern Methodist University and spent many years on archaeological digs in the West.

Girsch talked about how great the exhibit will be for tourists, and specifically those who come to St. Louis for the NHL All-Star Game, to be held on January 25, 2020, at the Enterprise Center in St. Louis,

“The NHL All-Star Game will be held in St. Louis this year,” he said. “The Blues are the first team to be Stanley Cup Champions and host the All-Star Game in the same year.” 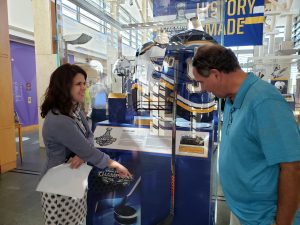 Leigh Walters, the Director of Marketing and Communications for the Museum (shown left with Rob Rains) said the Jordan Binnington case  (shown in photo above) was her favorite part of the exhibit. It features his leg pads. She showed media member the various cases in the presentation.

Walters pointed out that while the Blues exhibit is temporary there are other exhibits in the Museum that sports fans will love. 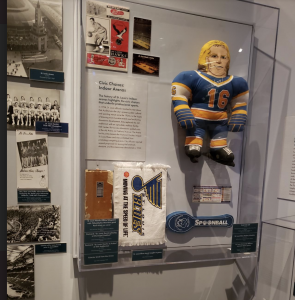 “We have an older Blues exhibit among the permanent exhibits at the Museum,” Walters said. “We want to incorporate more permanent exhibits about the Blues and we plan to re-do parts of the gallery to do that. We really have a lot of sports history from games St. Louisans played in the streets to the pro teams,”

There is a black and white mural of Sportsman’s Park and a photo of Jack Buck and Harry Caray and an area you can test your knowledge of St. Louis sports.

“We have an exhibit on Stan Musial,” she said “And also a Photo Journalism and Pulitzer Prize display in our first floor exhibit area.” 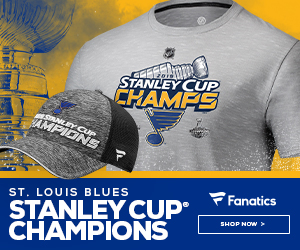 Audio by Mike Reeves The Blues lost 7-2 to the Boston Bruins in Game Three of the Stanley Cup Final on Saturday night at Enterprise Center in St. Louis. To hear the post game interviews […]

The Blues beat the Boston Bruins at the Enterprise Center on Monday night to even the Stanley Cup Playoffs at 2 wins each. To hear Craig Berube’s post-game press conference, click the audio player: