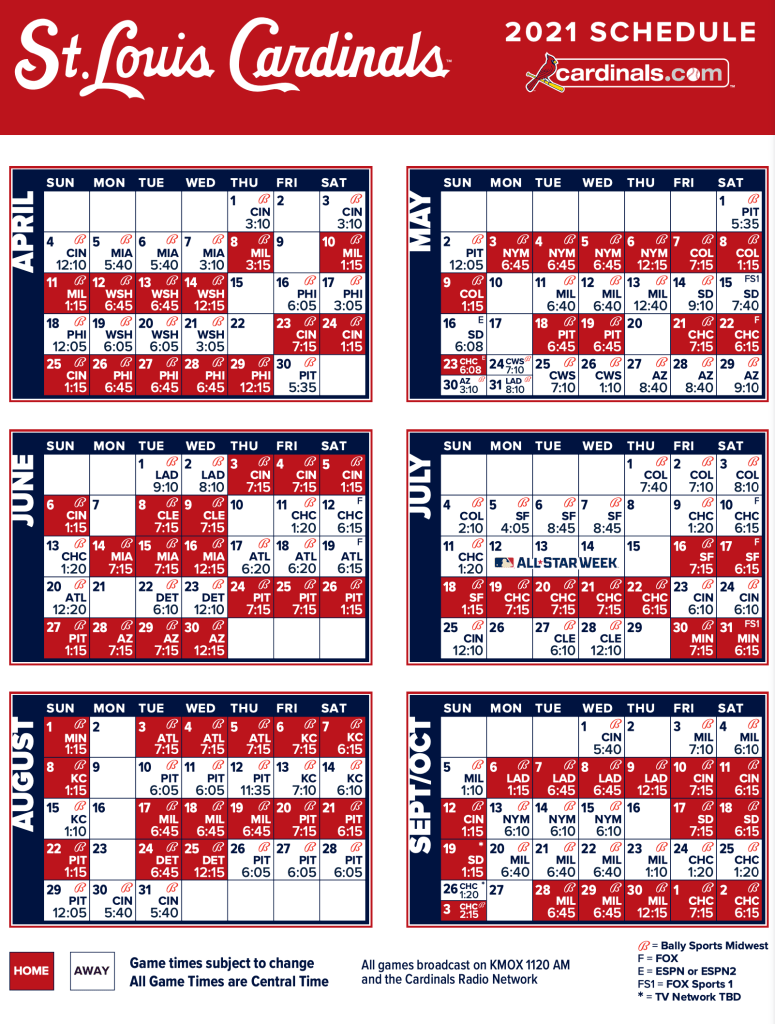 Stadium policies and updates check with Cardinals.com for the latest.

Bally Sports Midwest to Televise 151 Games; 13 Games to be Nationally Televised on ESPN/FOX/FS1

Every 2021 regular season game will be televised locally or nationally as well as broadcast on KMOX and the Cardinals Radio Network.  Additionally, all 81 home games will feature live Spanish radio broadcasts.

Fans can view a full list of homestand highlights at cardinals.com/homestand.

Budweiser Bash returns in 2021 with some Cardinal favorites! Fans who purchase a special Budweiser Bash Theme Ticket will receive a limited-edition bobblehead of that game’s featured player. Don’t miss your chance to collect the bobbleheads of all of your favorite alumni! | Requires special Theme Ticket voucher | More Info

College Night at Busch Stadium returns for 2021! Take a break from the books and grab your friends. For just $20, get a ticket to the game and a sweater fleece vest. | Requires special Theme Ticket voucher | More Info

Starting two hours prior to every Sunday home game, join us in Ford Plaza for games, prizes and FREE Prairie Farms frozen treats (while supplies last).

The Busch Stadium Fan Information Guide is designed to assist fans by presenting information about Busch Stadium offerings and accommodations.  View the guide at cardinals.com/info or via the MLB Ballpark app.

A number of policies and protocols are in place to ensure the health and safety of fans, employees, and players in 2021.  Fans are asked to wear masks when entering or circulating in the five indoor ticketed club areas, as well as the Official Team Store, Cardinals Authentics Shops and in all indoor public spaces at Ballpark Village. View the protocols at cardinals.com/backatbusch.

The Cardinals have transitioned exclusively to mobile ticket delivery via the MLB Ballpark App for the 2021 season.  Visit cardinals.com/ballparkapp for app instructions, tutorials and FAQ.

The Cardinals Fan Food Guide is available at cardinals.com/food and via the MLB Ballpark app to help fans locate their favorite food and beverages at Busch Stadium.

Concession locations will only accept credit/debit cards and digital wallet payments (e.g. Apple Pay, Samsung Pay or Google Pay) for payment.  Guests can purchase a debit card using cash at the three Schnucks Grab ‘N’ Go Markets inside Busch Stadium with no fees.  Debit cards are good at any location that accepts credit cards at the ballpark and any retailer outside the stadium.

Fans can now purchase individual game day parking directly from the Cardinals in the Starr Lot located directly across the street from Gate 2, on the southwest side of Busch Stadium.  Starr Lot parking can be purchased as part of your overall ticket purchase, or separately at cardinals.com/parking.

In order to provide the safest environment for all guests and staff, guests will not be permitted to exit and re-enter the facility during games.  A designated smoking area is set up at Gate 1 to allow guests access in and out of the stadium if they wish to smoke. The designated smoking area is open from gate opening until the end of the 7th inning.

Enjoy the best of Cardinals baseball in Cardinals Magazine. Since 1992, generations of Redbird fans have turned to Cardinals Magazine for exclusive coverage, unmatched variety and the definitive look at the present, future and past of their favorite team. Pick up your copy for just $5 at Busch Stadium—from vendors inside the gates, team store and merchandise locations, and Cardinals Authentic shops inside Busch Stadium and Ballpark Village.

Become a subscriber and receive a voucher for two free tickets to a 2021 or 2022 home game, or register for two years to take home a super-soft tribute t-shirt celebrating club legends Lou Brock and Bob Gibson.  To subscribe, visit cardinals.com/publications or call 314-345-9000.  Follow them on Twitter at @CardsMagazine.

2021 Cardinals media guides are available for $20 at the Official Cardinals Team Store, Cardinals Authentics Shops and at cardinals.com/mediaguide.

Cardinals programming airing on Bally Sports Midwest will stream live on the all-new Bally Sports app and on BallySports.com for consumers who authenticate through their pay-TV service.  The app and web site will launch in coordination with the network rebrand on March 31. The FOX Sports GO app will update to the new Bally Sports app upon the rebrand.

Currently, nine regular season games will be carried exclusively on either ESPN, FOX (aired locally on KTVI) or FS1 as part of Major League Baseball’s national television packages, with another four ESPN games scheduled to co-exist with the local Bally Sports Midwest telecast.  Two games have not been scheduled, but will be televised nationally or carried locally on Bally Sports Midwest.  The television schedule is subject to change.

In addition to televised game coverage, KMOX 1120 AM, the team’s flagship radio station, and most stations on the Cardinals Radio Network, will carry every regular season game.  New for 2021, Cardinals games will be simulcast locally on 98.7 FM.

Broadcasters Mike Shannon (50th and final season) and John Rooney (16th season) will again share the Cardinals radio calls at home.  Mike will call approximately 50 home games, while Ricky Horton will continue to join John Rooney behind the microphone for all Cardinals road games and the remaining home games.  Mike Claiborne returns to assist with broadcasts while Tom Ackerman, Kevin Wheeler and Joe Pott will serve as pre- and postgame hosts on KMOX.  This year marks KMOX’s 11th consecutive season as the flagship station and 64th year overall.  The Cardinals Radio Network consists of 145 radio stations in eight states and is the largest radio network in MLB.

The Cardinals, in cooperation with WIJR 880 AM La Tremenda, will produce 81 Spanish-language radio broadcasts for all St. Louis home games during the 2021 season.

Play-by-play announcer Polo Ascencio and color analyst Bengie Molina will return for their sixth season to provide Hispanic and Latino fans with a way to follow the Cardinals in their native language.  All 81 broadcasts will air locally on WIJR 880 AM and be streamed via cardinals.com and the MLB app.

The Cardinals are back at Busch Stadium for a brief three-game homestand vs. the Miami Marlins (June 14-16).  Today marks the first day of no capacity restrictions at Busch Stadium.  Fans can view a full list of homestand highlights at cardinals.com/homestand.

Audio by Mike Reeves John Mozeliak did a Zoom call with the media Sunday night. To hear it, click the audio player below:

Audio by Mike Reeves The Cardinals resume their season on Saturday with a double header against the White Sox. Mike Shildt talked to the media Friday night. To hear that interview which is in two […]

Rob Rains was a guest on Frank Cusumano’s Press Box Radio show on 590 AM. To hear the interview click the audio player below: Related articles: New article by Rob Rains: With Carlson now in […]