JUPITER, Fla. – On the first day of baseball’s unknown, the Cardinals players and staff were preparing to do the only thing they could do – wait to see what happens next.

Nobody knows how long the wait will be.

After the remaining spring training games were canceled and the start of the regular-season delayed on Thursday because of the coronavirus pandemic, the Cardinals had a team meeting on Friday morning, at which point they were “in a holding pattern” according to manager Mike Shildt.

The facility at Roger Dean Stadium was open for players to get treatment from trainers or for them to work out in the weight room on a voluntary basis, but there were no baseball-related activities taking place. The players originally were told to stay in the area, but later word came that they were going to be allowed to return home. Several players do have homes in the Jupiter area, so it would be easy for them to stay.

The Cardinals also sent their minor-league staff and players home on Friday, in some cases barely two days after they had arrived in Jupiter. They, like the major-league team, have no idea when they will return.

The start of the major-league season has been delayed until at least April 9, but there have been suggestions the start day could be pushed back further, even to some point in May. The minor-league seasons, which had been scheduled to start on April 9, will not start until the major league teams are back playing.

The longer the delay, the more likely it seems that another shorter version of spring training will be necessary before the season can begin.

“We are working through creating availability for the players that want it, but not mandating anything or suggesting anything formal,” Shildt said during a conference call with reporters. “Clearly we just don’t know. Any number of scenarios could come out today or tomorrow. We just don’t know.

“Patience and fluidity are two of the biggest words we use, along with strength, prayer and unity for ourselves, and each other and our families. Specific to baseball we’re not sure what that looks like.”

Shildt said during the meeting the players had questions about the situation that neither he or team executives could answer.

“The biggest challenge of this is the unknown,” he said. “Guys were accepting it, understanding it, trying to figure out where it fits for them, where it fits for us. Everybody got the information, is processing it and figuring out the best move forward.”

From the team standpoint, Shildt said the unknown of not knowing when the season will start makes it hard to plan on workouts, map out a schedule for pitchers and everything else they usually try to accomplish during the normal six weeks of spring training.

“Our encouragement initially is for those guys who live nearby to continue to play catch and as we get a little more clarity, everything works off timeframes,” Shildt said. “Two ways of looking at it; you can shut it down and then ramp back up, but also don’t want to go too hard right now. It’s really just about common sense right now.

“We have to be fluid. That’s going to be crucial.”

Shildt said the staff had discussed how to create and talk through the variety of scenarios that could take place in preparing for baseball’s return, and will do so again on Saturday.

“Clearly there’s multiple ones now,” Shildt said. “It’s hard to plan the unknown, but we can at least create a structure we can work off and narrow it down as things start to become more clear as we go.”

The Cardinals staff and players were not the only ones dealing with the effects of the spring training cancelations. Fans who had planned to be in the area for at least a week, attending several games, were on the telephone with airlines trying to book new flights and shorten their hotel reservations.

Other fans who had trips planned but had not arrived canceled their trips altogether. 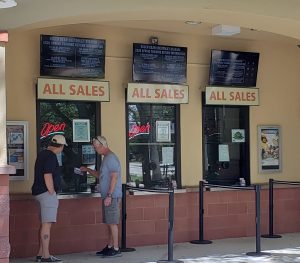 The cancelations will have a major financial impact on Roger Dean Chevrolet Stadium because of the ticket refunds which will now be required. Seven of the nine Cardinals’ games which were canceled would have been played there, including a sold-out game on Sunday against the Red Sox.

Outside the stadium on Friday, spring training merchandise already had been marked down at least 30 percent and one worker said he was happy to “make a deal.” 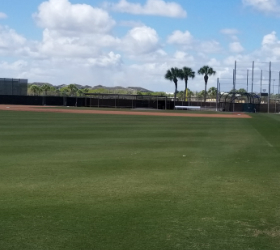 The back fields at the stadium complex which should have been packed with more than 150 minor leaguers, sat empty.

While fans were disappointed, they understood the decision to shut everything down and agreed there really was no other choice baseball could make. 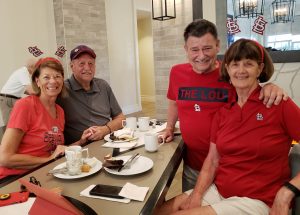 “We were going to leave next Wednesday but now we’re leaving Sunday,” said Mary Barrett (shown right in photo), who has worked as an usher at Busch Stadium for 18 years.

One of her co-workers, Diane Bennish (shown left), just got to Florida in the third inning of Thursday’s game. Her week-long stay of watching baseball with her friend and their husbands lasted six innings.

Bennish and her husband Don drove from St. Louis, and didn’t originally plan on going to Thursday’s game because they weren’t certain when they would get to town.

“At least we got there,” Bennish said. “Otherwise we wouldn’t have gotten to see one inning. We had six games, now we’re going to do the beach for two days and go home.”