As Cardinals Hall of Fame pitcher  Bob Gibson is laid to rest this week, a group of St. Louisans can rest themselves knowing they bestowed a great honor on the St. Louis Cardinals legend just a year and a half ago when they hosted he and Ozzie Smith at a ceremony in South St. Louis to rename a street after number 45.

A portion of Gibson Avenue, which has been around a long time in the Forest Park Southeast neighborhood, south of Interstate 64, near The Grove area was re-named “Bob Gibson Way.” In April of 2019– planned to coincide with the Cardinals Opening Day– Gibson was invited out to do the unveiling of the first street sign bearing his name in St. Louis.  Dignitaries were there including Mayor Lyda Krewson and Alderman Joe Roddy and the event was emceed by Ozzie Smith.

Corey Porter and his wife Kim have lived on Gibson Avenue for about four years and attended the ceremony last year. 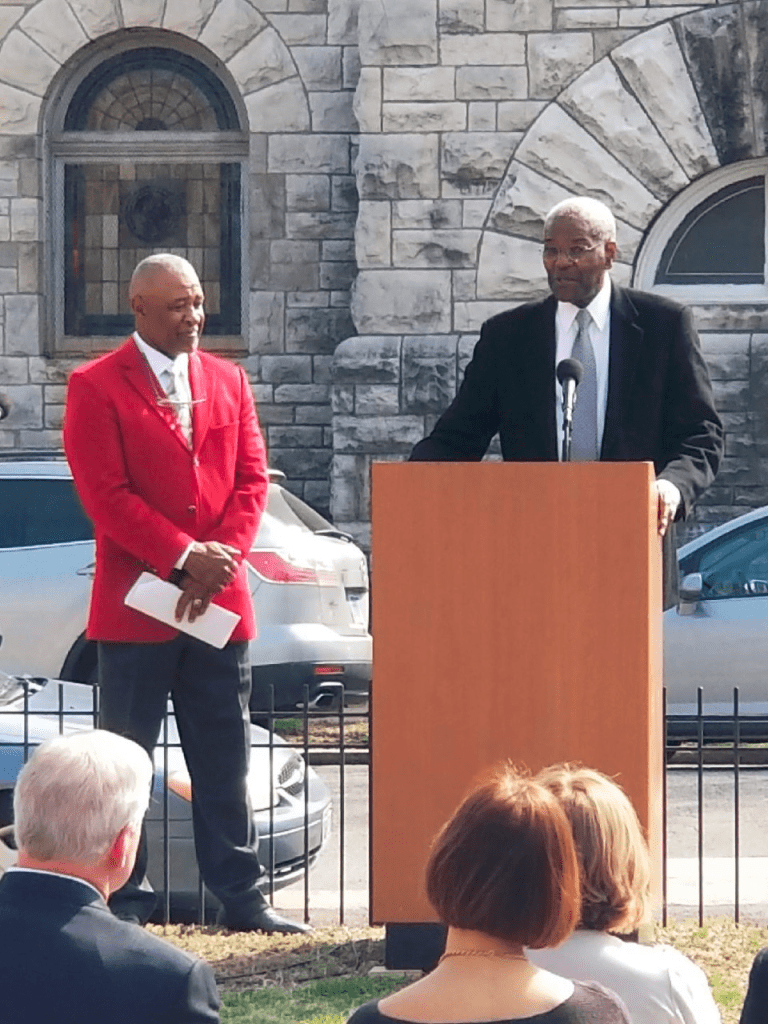 “Both Ozzie Smith and Bob Gibson came to the dedication,” said Porter who attended it with his wife and father, retired Alton Telegraph writer Steve Porter who got the opportunity to cover Gibson in the 1970’s. “The ceremony at Rainbow Park was fairly brief, with a few people speaking about Gibson and his work both on and off the field.”

His father had been the one who told him about Gibson’s death.

“My dad sent me a message,” said Porter. “It was a sad day for Cards fans and the organization. Two big losses.” (playoff hopes ended and Gibson’s death) 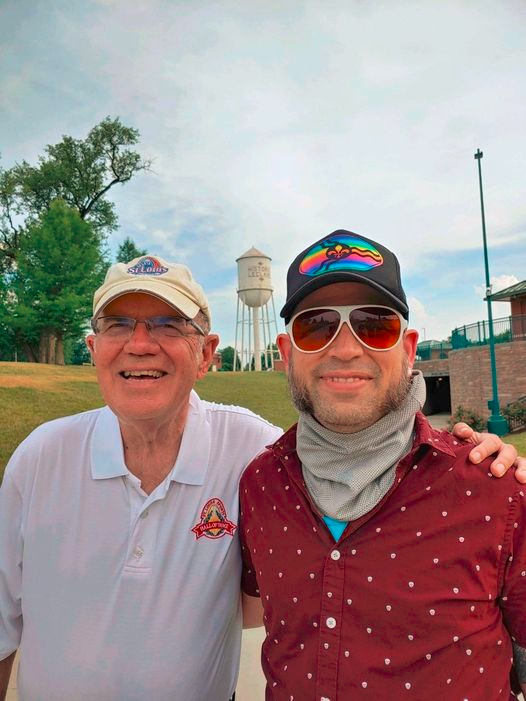 Fathers and sons have always had a bond involving baseball and Bob Gibson played a part in the Porter’s life.

“My dad and I have always collected baseball cards together, and the prize of my childhood collection was a Topps 1965 Gibson,” he said. “Dad collected the entire 1959 team–Gibson’s rookie year–so we’d hit up shops and conventions looking to complete the sets. He would share stories about him, like telling Tim McCarver that the only thing he knew about Gibby’s pitching was that he couldn’t hit it. He was a legend–the MLB lowered the mound after his 1968 performance.”

So it was special for them to attend the ceremony together, and Bob Gibson seemed to really enjoy the tribute of having a street named after him. Steve Porter took the picture, shown right, that day.

Roddy, who was a speaker that day said Gibson truly appreciated the day.

“He was very gracious but really kind of shy,” Roddy said. “He seemed to really enjoy the day and his wife was with him and seemed to appreciate the event.”

“Bob said he hadn’t been doing much public speaking at that point,” said Porter. “He was appreciative of neighborhood residents naming the street for him. He thought it was the right thing to do to be there.”

Porter was able to talk to both Gibson and Smith.

“It was great to be there that day and to be able to see both Bob and Ozzie.”

On that beautiful St. Louis day when the hearts of every Cardinals fans were light as the season was about to begin, no one could have imagined that Gibson would be gone before the next season ended.

In fact he passed away the day the Cardinals were eliminated from postseason.  His death came less than a month after his teammate and another St. Louis Cardinals icon—Lou Brock—died.

They were sad examples of how the year 2020 will be remembered, along with the on-again, off-again strange baseball season for the Cardinals.

While the statue of Bob Gibson at Busch Stadium will always be a big reminder of the pitcher who was known for his strength as Gibson once pitched with a broken leg. 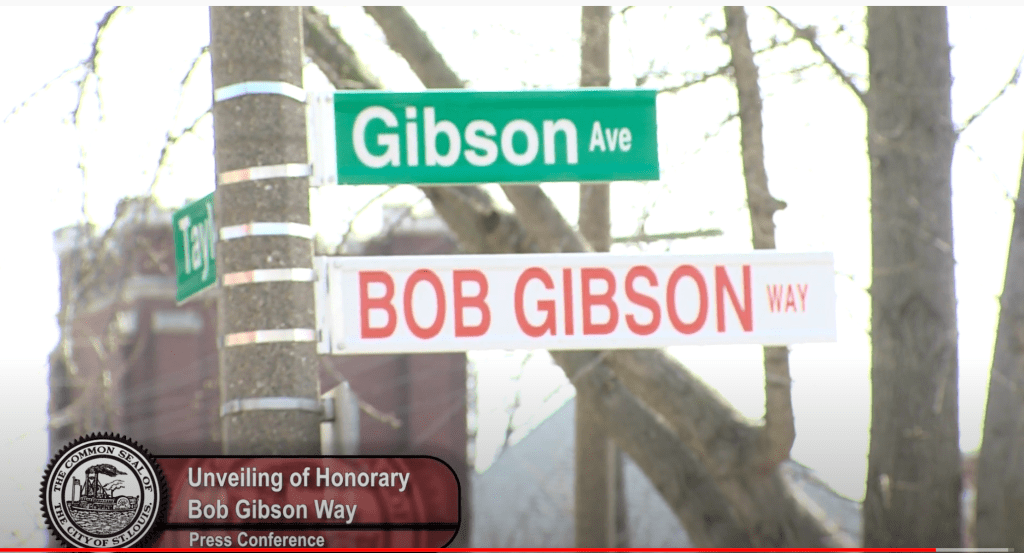 Now St. Louisans can drive to Bob Gibson Way and see his name and be reminded of his baseball accomplishments and the hope he brings to a neighborhood.

The way it all came about played out with the same persistence Gibson showed on the mound. Long-time Gibson Avenue resident, Judge Phil Heagney was talking with a friend who lived on the street also, Sean Collins, when the idea came up. After some contemplating about it, they took the idea to Alderman Joe Roddy.

It just happened Roddy had grown up on Gibson Avenue. He remembers playing baseball in the street growing up; and as kids did back then they would argue about who got to be which player. One always wanted to be Lou Brock and he remembers the kid who lived at 4545 Gibson felt he had claim to being Bob Gibson.

Of course Roddy would love to see his old street be named to honor one of his heroes but there were rules to follow. One does not just decide to re-name a street. There is a lot is involved. Residents would have to change their postal address and there may be some who feel it would be more trouble than it’s worth.

Roddy said they would need petitions.

“Seventy-five percent of the residents on the street would need to agree to it to have it even brought up to be changed,” he said.

So Heagney got a group together and they started going around the neighborhood. In 2018 they started and they went door to door asking each neighbor to add their name. It was a long, procedure to get all the signatures, but they never gave up.

Once they had done all required, Roddy brought it up for vote at the Board of Alderman. It passed and Mayor Lyda Krewson signed off on it. 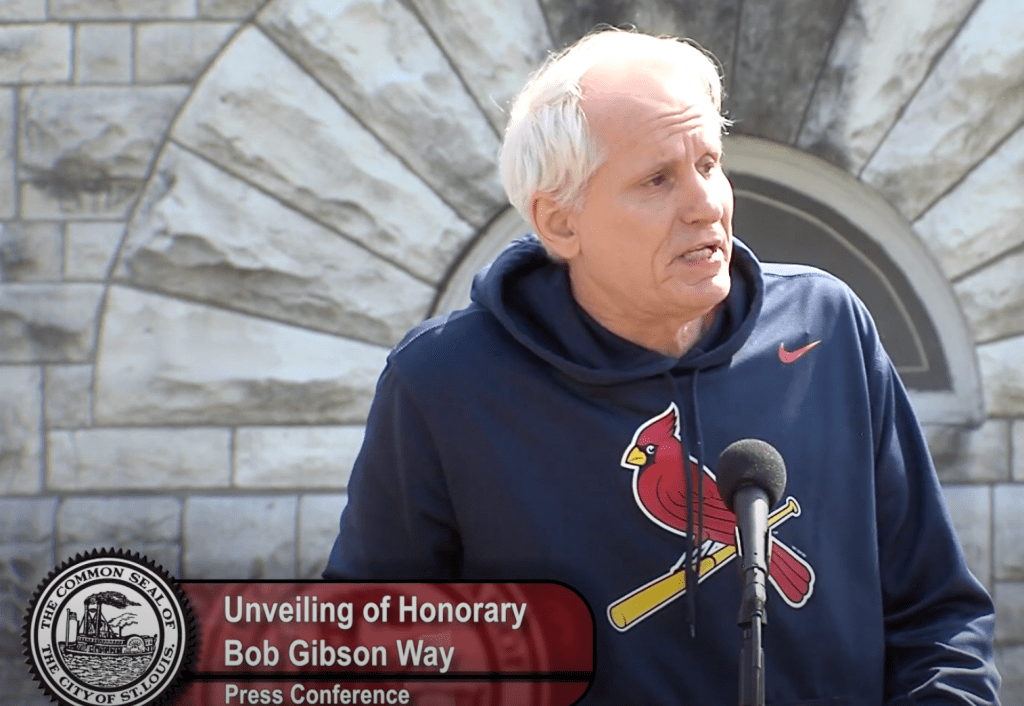 The day they dedicated the street, Roddy’s remarks indicated how he felt that Cardinals baseball bridges the gap between all factions of people. The photo, left, was from the STL TV’s broadcast of the dedication when Roddy was speaking.

“We live in a divisive time,” he said that day and the words still ring true and maybe even a little more today. “I think about how important baseball is–and certainly it’s not like crime or housing or education all those far more important issues—but it’s kind of nice to know that we all have something in common. During a time when half the people in our country are getting things from FOX and the other half from CNN, it’s nice to know that almost everyone in the St. Louis region knew that April was here when a guy by the name of Ozzie did a back flip, and when baseball legends came back like Bob Gibson and rode in a parade behind Clydesdales.

“It was nice to know that every year from April through October when you stood in line at the gas station or around a water cooler, it doesn’t matter what your race is or what your sex is, your sexual orientation, it doesn’t matter what job you have or anything else, but you have an instant connection by just  saying ‘What do you think about the Cards?’ That’s something that baseball does for us.”

That day Heagney said, “What really pleased me was that EVERYBODY was in favor of re-naming Gibson Ave. to honor Bob Gibson and we got over 80% of the people living from the 4200 block through the 4500 block to sign the petition.” 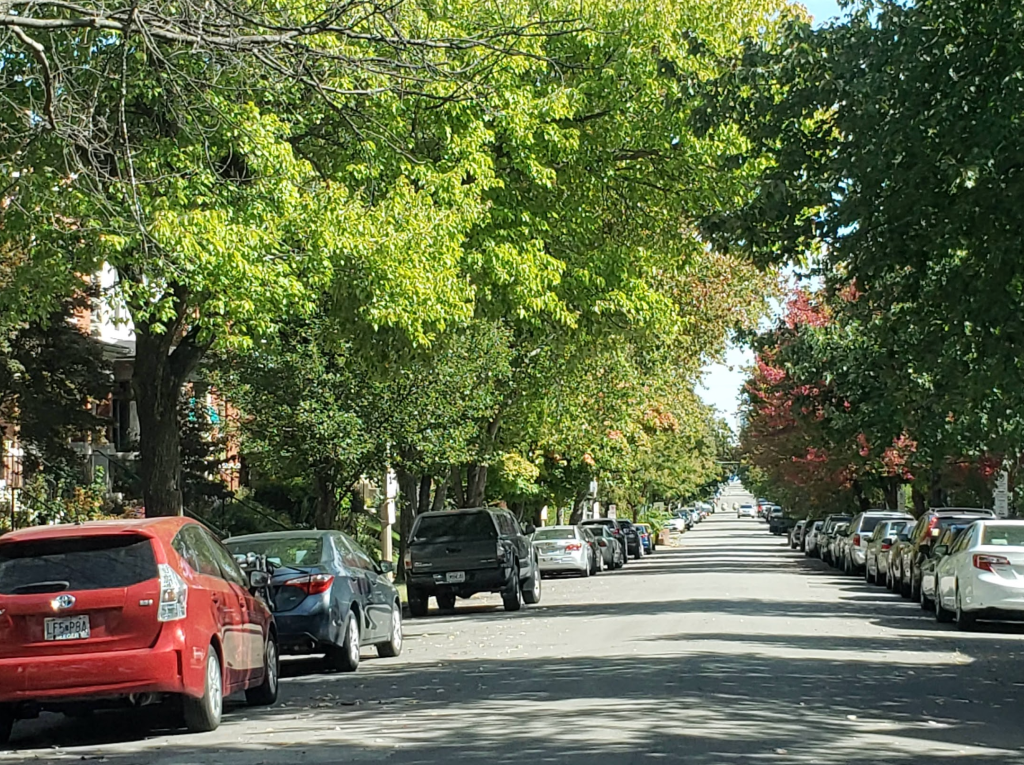 The Cardinals press release the day of the dedication stated, ‘The St. Louis Cardinals, in cooperation with Park Central Development, dedicated the honorary ‘Bob Gibson Way’ April 3, 2019 during a ceremony in St. Louis’ Grove Neighborhood. Gibson Avenue, from the 4200 block on the east end to Kingshighway on the west end, has been renamed ‘Honorary Bob Gibson Way’ for the St. Louis Cardinals and National Baseball Famer.”

Fans wanting to find the sign should go to the   4200 block of Gibson Ave. on the east, to Kingshighway on the west. The street is located in the Forest Park Southeast neighborhood, south of Interstate 64.

Gibson lived most of his life in Omaha, Nebraska and it was there he died of pancreatic cancer. Even though he was touched by the St. Louis gesture, it was not the first street named after him

In June 1999, Bob Gibson Boulevard was dedicated, just down the hill from old Rosenblatt Stadium in Omaha.

That day he was as humbled by the dedication as he was in St. Louis. According to Omaha World-Herald he said he never dreamed he would stand under a street sign with his name on it.

Steve Porter said what most Cardinals fans think: “Bob Gibson was the greatest competitor I saw and forever be etched into the fabric of Cardinal baseball.”